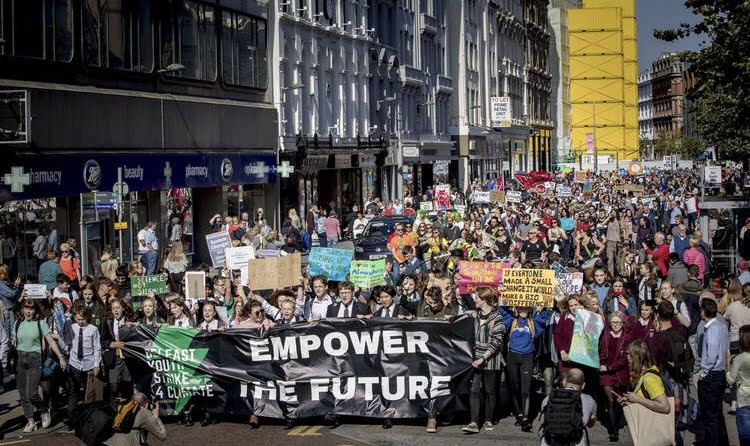 Yesterday was 1 year since the September 20th Global Strike. Globally, we had 7.6 million people take to the streets in 150 countries and every continent including Antarctica. This was a huge milestone for us in the Fridays for Future movement, not least for Belfast. We had around 7,000 people take to the streets in Belfast and a climate emergency was declared in our city council as a result. This was a once in a lifetime experience and I feel honoured to have been a part of it. It took months of organising, but was it all worth it?

I felt the most hopeful at the prospect of climate action becoming reality when marching up Royal Avenue than I have felt in the last year. Our largest protest prior to september 20th had around 300 people and so having thousands of people was completely unprecedented to us. It felt like it meant something. We achieved something by taking to the streets. You could feel the electricity in the air and the anticipation building even before our strike as the numbers came in from other time zones and people were turning up in unheard of numbers.

The morning of the strike, we and some other young people had breakfast in the Lord Mayor’s chamber and discussed the future of climate politics in this country and it felt like we were actually being listened to. At the end of the march, we held speeches at Belfast City Hall on a huge stage. Beforehand, the security asked us how many people we thought would attend as they could only have 4,000 people there. We laughed. We thought that was impossible for us to fill the space, and that we’d be impressed if a quarter of that showed up. On the day, we ate our words. The grounds were packed full and overspilling onto the streets. One of the speakers was the Lord Mayor of Belfast and he said that he would show us what democracy looks like and a climate emergency would be discussed at their next meeting. 2 weeks later we got it declared.

At the time, this felt like a major breakthrough. In hindsight, I was quite naive in thinking this. A climate emergency is basically just 2 empty words, 2 lies. Since then, they have done nothing that would be radical enough to be acting in an emergency. Despite what our environment minister has claimed, we really are in a climate and ecological emergency. We wasted that year just like we have wasted the last 3 decades. The longer we wait, the more dire the situation will become. This isn’t a problem for future generations. That generation has already come, and it is ours. We are not the only country that has wasted this time, no country in the world is acting adequately.

A lot has changed since September 20th 2019, but not for the better. More people have become climate refugees and have even lost their lives to the climate crisis. Our siblings in MAPA have been experiencing the climate crisis first hand and we must use our privilege here in Ireland to uplift them and stand with them.

In the 8 months we’ve had of 2020 there have been forty-one thousand and fifty one wildfires. By the end of this decade (less than 10 years) one hundred and forty seven million people will be hit by floods from rivers and coasts annually. Between 2000 and 2013, 20% of the Earth’s surface has deteriorated and 2 million square kilometres of ecosystems have been lost. These are statistics that would not be out of place in a dystopian novel. This is our reality. We cannot stop fighting for our survival. Environmental protectors are already dying on the front lines of this crisis.

We were ignored after the 20th of September 2019. We refuse to be silenced again. Join the fight on the global day of action on the 25th of september 2020. Not only are we out of time, we are living on borrowed time.

Please consider donating to help me fulfil my dreams, thank you ->